First of all, let me tell you that this review was published back in January 2011 in yukmakan and now i just re-publish it - in case i get a chance for the free break-fasting and gathering with other bloggers conducted by Grand Indonesia shopping mall as written here Grand Indo's note.

My family has yearly ritual every 31 December to have dinner and it's usually in a restaurant rather than having it at home.Last year was my turn to treat them and i knew that this second Marche Restaurant was just opening in Grand Indonesia (the first one is in Plaza Senayan).

Arrived there safe and smooth (yeah my house is just nearby), no queue to enter the resto. We got inside and given a card each to be swiped each we bought something.

Oh God, it's just too difficult to choose what to eat with tens of choices. Finally I chose Rosti with Bacon and Egg Topping. This dish is originated from Switzerland as the chef said. 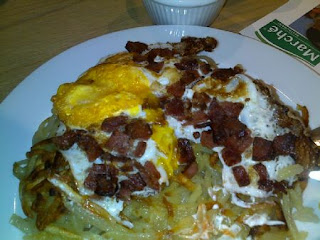 Rosti is made from fried grated-potato (surely it's a special variety of potato and here in Marche, it's mixed from two kinds of potatoes cultivated in Indonesia). The fried potato is mixed with salt and pepper (as I remembered) and small slices of beef bacon and topped with fried egg. It's something simple but tastes awesome. I believe this is because of the potato itself.

As for me the portion is big enough so that i shared it with my family. When I finished eating this Rosti, I was thinking of having a dessert (it was new year eve and i just wanted to celebrate it my way,lol) then I walked to the dessert section, looking at the varieties and finally I chose German Apple Cake (to tell you the truth the dessert was another big portion for me that I had to share it with the family). The taste was another awesome dish from Marche Restaurant.The crumble was tasty,ugh,I'm craving while re-write this. 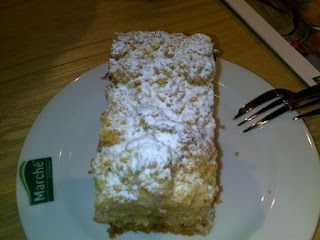 Before getting out and paying the dinner, I stopped by at the Rosti section and had a chit chat with the chef who explained me all about Rosti. He was such a nice guy. I planned to make one for me at home but I haven't got any time till now,:(

Overall, the experience back in Marche Restaurant was unforgettable, I like the ambiance and the price is reasonable (mostly for its big portion).
Email Post
Labels: Food Review german apple cake marche grand indonesia rosti